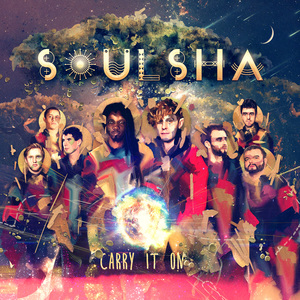 Soulsha is a party, a revolution, and an adventure through different traditions. It brings together some of Boston’s top musicians in Scottish, West African, and Funk music to create a sound you won’t find anywhere else on the planet.

Scottish dancing and incredible energy make every Soulsha show an unforgettable live experience. Intricate rhythms, soaring bagpipe melodies, and New Orleans-infused horn lines come together seamlessly, reminding us that we’re all in this together.

The band formed through a series of serendipitous meetings in the thriving and intersecting multi-cultural melting pot of Boston. Many of the members are virtuosic and highly esteemed tradition-bearers in their styles. The music they’ve created is a conversation between cultures that breaks down all the boundaries, moving the audience to abandon their assumptions as they lose themselves on the dance floor.

While it shares obvious roots with Afro-Celt Sound System’s electronic fusion, the funk-inspired sound of Soulsha puts tradition and interchange center stage, bringing the party energy of Rebirth Brass Band, and the cultural gravitas of masters like Malian Toumani Diabaté.

The sound is fun but deep, fresh but familiar, global and yet deeply American.

When Soulsha plays their unique amalgam of West African, Celtic, and Funk sounds, there’s no wrong way to dance: Senegalese mbalax, Scottish step dancing, or just moving your body to the groove, it all fits right in. Soulsha’s debut album, Carry It On, spreads the philosophy that staying true to your roots doesn’t mean turning inward, it means opening your ears to the world’s sounds and letting them move you (release: May 31, 2019).

For Soulsha, creating music together is about hearing and honoring the musical heritage of the band’s members, not melting them down to a generic “global” sound. As Soulsha’s bagpiper Elias Alexander says, “Wherever you are from, if you go against the flow of the mainstream to keep your roots alive, you can appreciate the struggles other traditional cultures face.” His fellow co-founder, multi-instrumentalist Neil Pearlman, agrees: “We make music to inspire curiosity about the wealth of human culture and empathy for other people. If we can see difference as a positive thing, we’ll all be stronger.”

The album’s opening track, “Isle of Skye Reel,” embodies Soulsha’s philosophy. There are two hearts to the track: a centuries-old Scottish tune, “Isle of Skye,” and a new bàkk, a Senegalese rhythmic phrase composed by drummer Lamine Touré. Elias’s pipes and album guest Alasdair White’s fiddle carry the “Isle of Skye” tune, while a horn line emphasizes a funky rhythm you might not have noticed in Scottish music before. The African and western drums contribute a driving energy that won’t quit until the band drops the last note.

The title track, ”Carry It On” gives joyful voice to that same idea: “I want to see people making music, being proud of who they are.” The English lyrics trade off with a Wolof break, Scottish pipes have a dialogue with jazz trumpet, and a fiddle jig meets up with a funk bass line. It all adds up to a jubilant jam, like a block party where the neighbors hail from different corners of the world but dance, sing, and celebrate together. These two tracks set the tone for an album that’s a party, a revolution, and an adventure through different traditions.

Soulsha grew from a mission shared by founders Elias Alexander and Neil Pearlman: to bring out the groove in the Scottish music they both grew up with. “Time in New Orleans tuned my ear differently, so I started hearing the syncopated rhythms in Scottish tunes,” Elias explains. “Most of the Celtic fusion I hear tends to stick to “four on the floor” rhythms. I wondered, why isn’t there a Scottish funk fusion band?”

That idea crystalized when Neil and Elias met Lamine Touré, a Senegalese drummer based in Boston. Lamine makes music within his griot family’s ancient tradition of sabar drumming and in Senegal’s modern mbalax style, popularized around the world by Youssou N’Dour. ‘My mind was blown,” Elias enthuses, “Not just by his incredible skills and wealth of tradition, but also by the similarities I saw between Scottish and Senegalese music.”

Deeper than time signatures and scales, those similarities have to do with how the traditions stay alive across the generations. Both Scottish bagpiping and Senegalese sabar drumming are built out of core musical phrases— a Scottish “tune” or a sabar “bàkk”— that might be as ancient as the hills or as new as last week, and remain part of the tradition only as long as people keep carrying it on. Even more importantly, Lamine, Elias, and Neil discovered a philosophical kinship: they all agree that caring about roots music means being open to one another’s traditions.

Since that meeting of musical minds, Soulsha has grown into an ensemble of eight kindred spirits. Like a “let’s get the team together” montage in a classic heist movie, Soulsha drew together skilled musicians from the jazz, R&B, Irish session, and funk scenes, united by enthusiastic curiosity for the sounds their bandmates bring to the party: Elias’s pipes, Neil’s piano (and mandolin, and accordion, and more), Lamine’s sabar drums, Charles Berthoud’s bass, Jake Galloway’s smooth trumpet, Conor Hearn’s guitar, Dylan Sherry’s sax, and Chris Southiere’s drum set. Elias remarks, “There is so much respect within the band because everyone is so good in their own tradition. When we play together we are also listening and honoring each other, and that’s beautiful.”

And it’s infectiously danceable, another chord that connects Scottish, Senegalese, and funk music. At live shows, Lamine leads the audience in Senegalese dance, Neil shows off his Scottish step dancing, and everybody gets moving. Soulsha made sure to bring that energy into the studio. “We tried to keep that feeling of movement,” Neil explains. “When we recorded backing vocals, we were all in the room jumping around. Lamine has moves that go along with the words he sings, and he was dancing in the studio.” Elias laughs, “I can’t hear his vocals without imagining him making those moves!”

The name Soulsha is a pun on the Gaelic word soillse, which means ray of light. Elias hopes Carry it On spreads some light for listeners: “I would love people to come away hearing the funk in Scottish music and the beauty of sabar, and maybe getting inspired to dig into their own traditions. Soulsha is about everyone feeling uplifted, safe, and allowed to be themselves.”